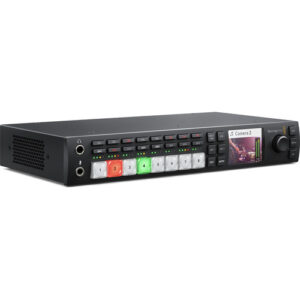 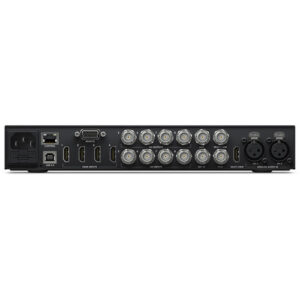 Designed for broadcasters and A/V professionals, Blackmagic Design‘s ATEM Television Studio HD is a compact yet powerful and easy-to-operate solution. Four of each HDMI and SDI inputs are available on the rear of the chassis, and both sets of inputs support SD and HD resolution signals.

ATEM Television Studio HD is the first live production switcher designed for both broadcasters and AV professionals. It includes 4 SDI and 4 HDMI inputs so you can connect up to 8 sources, and it supports all formats up to 1080p60! Packed with high end broadcast features, ATEM Television Studio HD has re-sync on all inputs so you always get clean switching whether you’re using professional or consumer cameras. Plus, you get multi view output so you can see all of your sources, preview and program on a single screen, aux out, built in talkback, 2 still stores, an audio mixer, camera control unit and more! ATEM Television Studio HD is perfect for live production, episodic television, web shows, AV or even live coverage of video gaming competitions! Simply plug in your cameras, game consoles or computers and start switching live!

Turn any live event into a professional HD television program!

ATEM Television Studio HD is the fastest and most affordable way to create incredible HD programs immediately from live events! It’s perfect for broadcasters, professional sports, concerts, seminars, or even the new emerging generation of web broadcasters using platforms such as YouTube Live, Facebook Live and Twitch.tv. You can switch between multiple cameras, game consoles and computers in real time, all with broadcast quality transitions, graphics and effects! ATEM Television Studio HD features clean professional switching so there’s never a glitch when changing sources. That means you can even use it as a front end controller for your AV system and switch between multiple sources with the press of a button!

The world’s smallest all in one broadcast switcher!

ATEM Television Studio HD is a true professional switcher that’s incredibly tiny, making it compact and portable enough to use anywhere! The all in one design includes a built in AC power supply, full front panel controls with input source buttons for switching, a built in LCD screen, spin knob and more. It’s small enough to use on the desktop, or it can be mounted in equipment racks using the optional Teranex Mini Rack Shelf. That means it fits alongside other Blackmagic Design products such as Teranex Mini converters, HyperDeck Studio Mini recorders, Blackmagic MultiView 4 or Blackmagic Web Presenter, all in a single rack unit.

Operate all switcher features directly from the front panel!

The front panel controls on ATEM Television Studio HD feature 8 large illuminated buttons for switching, along with audio controls, buttons for the down stream keyer, fade to black, media players, and cut-bus style or automatic switching with transitions. That means you can create a program right from the front panel! It also makes ATEM Television Studio HD perfect for things such as professional AV installations where all you need is to simply switch between sources. The built in LCD screen lets you adjust all switcher features via menus, plus it can be used for video and audio monitoring, aux control and to display the audio channel you’re adjusting.

Connect up to 8 cameras, game consoles or computers!

ATEM Television Studio HD is a professional broadcast SDI switcher that also includes loads of HDMI connections! With four 3G-SDI and four HDMI inputs, you can connect up to 8 cameras, game consoles, computers or other sources and work in all SD and HD formats up to 1080p60! That means you can start with affordable HDMI consumer cameras, or work with professional SDI broadcast cameras. You also get reference input, analog audio in, RS-422 PTZ control, and Ethernet for connecting hardware or software control panels! Unlike other switchers, all video inputs feature automatic frame re-synchronizers, so you don’t need expensive genlock cameras. This means you can plug in any video source and it just works!

Broadcast quality connections that won’t hold you back technically.

ATEM Television Studio HD includes professional SDI program and aux outputs, along with SDI and HDMI outputs for multi view monitoring. The SDI program output lets you connect your ATEM Television Studio HD to professional decks and recorders, like HyperDeck Studio Mini, so you can record your program at the highest possible quality. The multi view SDI and HDMI outputs make it easy to monitor your program on virtually any display, including consumer HD televisions! The Aux output lets you send your switched program or a clean feed without graphics and overlays out to another display, deck, or even massive screens on stage behind a performer!

None, embedded audio only.

Ethernet supports 10/100/1000 BaseT. Allows direct connection between panel and chassis, or via network. Also used for updating the software.

8 routable and 2 fixed for Program and Preview.

Red for program and green for preview indication.

Fill and key for each Media Player.

SD card with software and manual 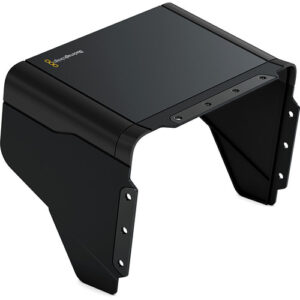 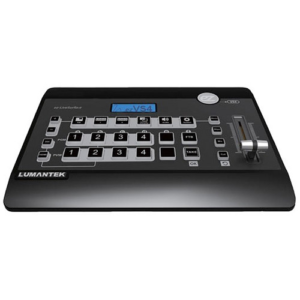 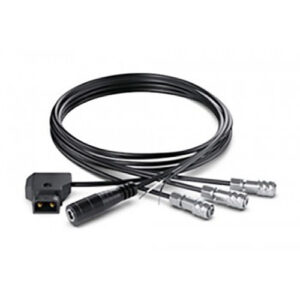 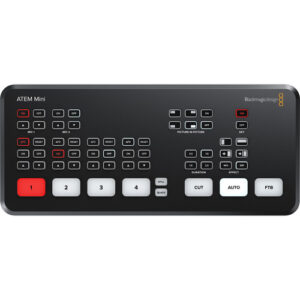 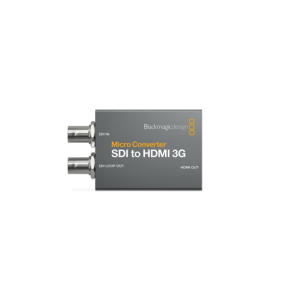 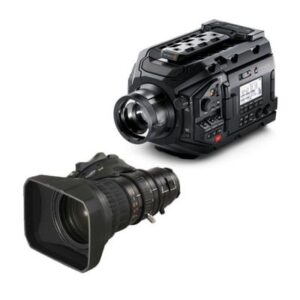 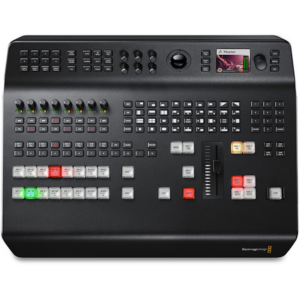 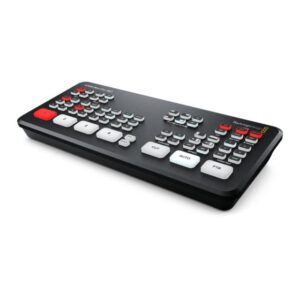